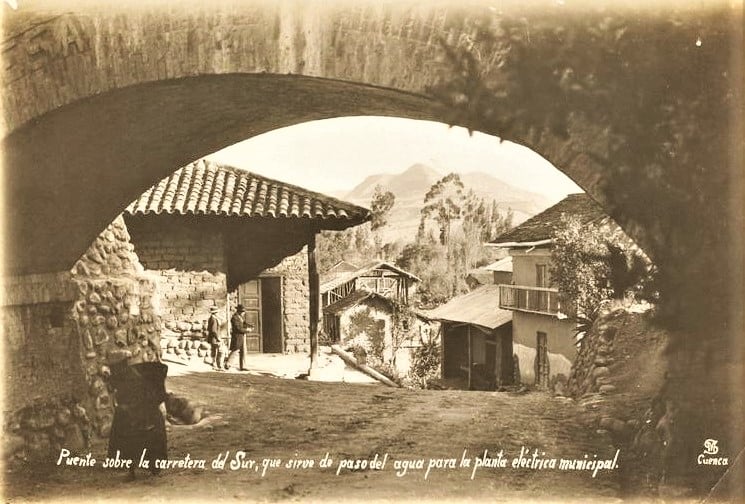 Old Photo with view from under the Yanuncay Aqueduct.

This house dates from 1903 and was owned by the priest Jesús Arriaga. It is located in what used to be the southern entrance to the city, on Avenida Loja, and the banks of the Yanuncay River, and next to the stone and brick arch of the Yanuncay Aqueduct, which carried water to the first hydroelectric plant in Cuenca.

The patio and wall come from Yanuncay river rocks.

In addition to being a priest, Jesus Arriaga was a historian and dedicated himself to researching pre-Columbian history. Father Jesus Arriaga directly influenced researcher Dr. Max Uhle, who confirmed in 1922 that Cuenca was the Incan city of Tomebamba.

In 1908 it passed into the hands of the Durán family and for over three generations it belonged to the Duran Guerrero family.

After the house survived two fires, the City of Cuenca purchased it in 2004. After a restoration process in 2017, it was called the Casa Del Arco, because of its location next to the Aqueduct arches.

The house is made of adobe and wattle and daub walls.

In 2018 it was repurposed as La Casa del Artista.  On the ground floor are two rooms which are used as a gallery for art exhibitions.  The other rooms are used for art workshops.

Substation of the Municipal Hydroelectric Plant. Large iron towers along Av. 10 de Agosto and Av. Solano supported the cables that reached the substation from where electricity was distributed throughout the city.

The City of Cuenca was very excited to get electricity in 1914.